In the Midst of Winter 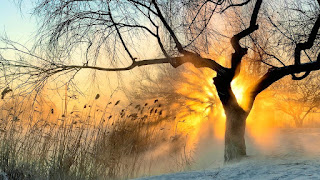 “In the midst of winter, I found there was, within me, an invincible summer. And that makes me happy. For it says that no matter how hard the world pushes against me, within me, there's something stronger – something better, pushing right back.” ― Albert Camus.

As I sit to write today, it is still winter in my new home in upper New York.  In some ways, it feels as though it has been winter for months now.  It is, in fact, almost a year to the day when, at that time still in UT, it became obvious to me and my friends that we should cancel gatherings and practice stay at home strategies to protect ourselves and each other from the corona virus.  In fact, as a friend just reminded me, March 10, 2020 was the last time we gathered to celebrate another friend's birthday.

One year, and here I am.  Looking out across the remnants of several snowfalls, out to a bank of evergreens.  Looking out across a new living space, in an apartment for the first time in over 40 years, typing in a stillness broken only by the sound of of my breathing, the hum of one of the several space heaters employed to break the chill I cannot seem to otherwise dispel, or the creaking of the footsteps of upstairs' neighbors I've yet to meet.

The boxes of belongings have all been opened, though piles exist in almost every room, waiting for my final decision - do I keep or do I let go?  For I have brought more than I need, more than I can use, and, increasingly, more than I want.

Rufus has adjusted well, perhaps even more quickly than I did.  He has learned to climb the stairs that I bought for him when I could hear myself question how long I would be able to lift him into bed.  He sleeps there now as I type.  He has become attached to my sister, the main reason I decided to move this past fall.  And no, he doesn't like the snow which is a good thing.  As small as he is and as high as the snow drifts have been, I would have had to dig him out had he gone romping into it.

I would be remiss if I did not admit that this move has been harder than I expected.  For almost two months my belongings remained in Utah while the search for a van driver went unheeded.  For almost two months we lived with my sister and brother-in-law who were generous, loving and supportive.  But for someone who has been independent for over 40 years, these were a long two months.  And for someone who has lived in a house for over 40 years, apartment living has been a challenge to my creativity and an adjustment that is only getting easier now.

And then there was my birthday, my 80th birthday.  The birthday John and I had talked about in recent years as an occasion to host a big party as we had done for my 50th.  Followed the same week by Valentine's Day.  Alone.  With too much time and space to dwell on past birthdays and Valentine's Days with him, taking the entire week to celebrate, to read the beautiful cards he would send, cards I came upon opening the last box.

Then, yesterday, a message from someone I hope will become a new friend calling me amazing for having the courage to move across country, by myself, at this stage of my life.  So, I took pause to let that in.  To write in my personal journal this morning all that I have accomplished since moving in.  All the boxes unpacked, all the services I have found, the hard decisions I have made, the many ways I've reached out to stay connected, the new ways I am using technology, the environment I am creating to sustain and nourish myself and my little Rufus.

I also took time to acknowledge all the help I've received - from  the staff in the leasing office and the young handymen who put together shelf upon shelf and took apart box after box, to new insurance agents and clerks in the grocery and hardware stores, and strangers who, hearing I am new to the area, have been warm and welcoming.  Mostly, to my sister and brother-in-law who have welcomed me with open arms and generous hearts and to all my friends who call and Skype and Zoom and send notes to remind me that I really am not alone.