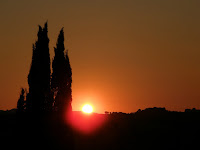 "Don't cry because it's over.  Smile because it happened."
~ Dr. Seuss

I love Dr. Seuss and I so want to believe this.   I can recognize that I am making progress, for sure.  In those first few weeks after John died, I despaired of remembering him other than from those last six months when he declined so significantly, losing weight, losing his ability to drive, losing his eyesight, eventually needing my help for even the most rudimentary tasks.  I panicked when I couldn't remember the silly little jingle he created and sang only in the shower.  I couldn't sleep in our bed, couldn't ward off the regrets.

I turned to a multitude of grief books, hoping to find that someone else, anyone else, who felt the way I did.  Thankfully, I found the reassurance I was looking forward.  Not crazy, not unusual to feel so frantic.

Then one morning, out of nowhere, the jingle emerged as I was waking up.  Gradually, sweet memories from those last six months returned.  How pleased he was that our little rescue dog, Rufus, and I had "found each other."  How he would sing to me, "Have I told you lately that I love you?" several times a day.  How, when I asked if he knew how much I loved him, his response was "and do you know how much that mattered?"  How he always expressed his gratitude to me, to his doctor, to the home health care and hospice nurses who cared for him.  Memories that, though they first brought tears, could also evoke a smile.  Not either/or but both.

In recent months, other memories have returned, sometimes initiated deliberately by someone sharing a common experience.  Or when I have had the courage to sit with photo albums or my basket of all the cards he sent me over the years.  When I have had the courage to go through a travel journal - our trips to Tuscany or the one to Sicily when we came upon a relative of mine sitting on a doorstep in her housecoat and flannel slippers, a scene from a Fellini movie.  Or the photos from the helicopter ride down the face of the Jurassic Falls.  How thrilled he was to sit beside the pilot.

There are the memories that pop up unexpectedly - when it's dusk and I can hear him call to me to "come see this.  You won't believe the sky."  Or when I wake in the morning and recall how he would ask how I slept.  Hearing that Tiger Woods won the Masters and knowing he would have said, "I told you so."  Walking into the local Starbucks and ordering an iced tea the way he would have.

The intimate memories - the night we met in a "bar in Kansas City."  Well, an elegant lounge actually, but he loved telling everyone it was a bar.  Our wedding, the way he hovered when I had breast cancer, the beautiful messages he wrote on every card until he could no longer even sign his name.

There isn't a day now when yet another memory emerges.  Bidden, unbidden.  Most of the time I can smile, well, at least smile first.  Am I at the point when I don't cry?  Not yet.  Will there come a day when I can simply smile because it happened?  Maybe, hopefully, but just not yet.